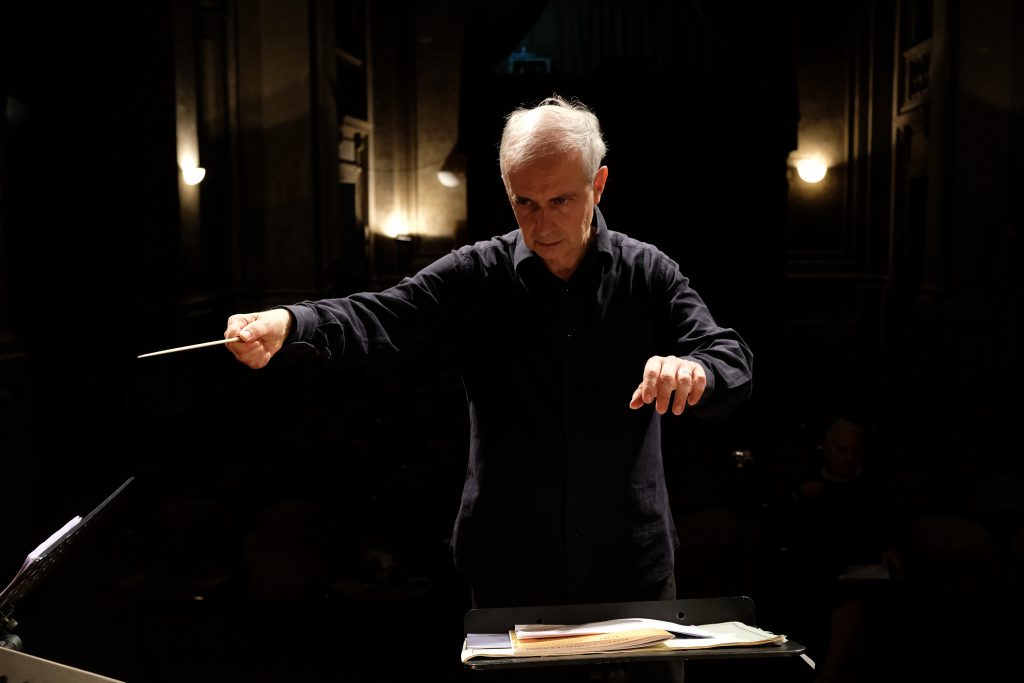 Vittorio Parisi ha studied together the classical harmony and the contemporary music techniques developing an interest for the new music that has given him the opportunity to conduct hundreds of first performances and to work with and for some of the most prominent composers of contemporary music such as JOHN CAGE, LUCIANO BERIO, GOFFREDO PETRASSI, FRANCO DONATONI, NICCOLO’ CASTIGLIONI, GIACINTO SCELSI, SALVATORE SCIARRINO, MAGNUS LINDBERG, AZIO CORGHI, HENRI POUSSEUR, IVAN FEDELE, SERGIO CALLIGARIS, ALESSANDRO SOLBIATI and many many others. When he was 19 he followed a masterclass for composers and conductors with KARLHEINZ STOCKHAUSEN.

He knew Johh Cage when he was a student in Milano Conservatorio and years later he had the honour to work with him conducting the first Italian performance of “Thirty pieces for 5 orchestras” in collaboration with Luciano Berio and other 3 conductors. The collaboration with Berio has been made also for “Halleluja II” and, years later, he had the authorization to conduct “Requies” in a ballet performance in Rome Opera House.

Vittorio Parisi met Goffredo Petrassi, when he was still studying conducting, for a performance of “Sonata da Camera” for harpsychord and 10 instruments. A few years later Petrassi has chosen him to conduct the honorary concert for his 80th birthday in his hometown with the Rome Radio Orchestra and Choir. He has been friend of Niccolò Castiglioni conducting many of his works including the first world performance of “Sinfonietta” in Milano. In 1983 he met Giacinto Scelsi conducting a concert of his music in Rome with another performance in Strasbourg and becoming one of his most faithful performers.

The collaboration with Magnus Lindberg started for the first world performance of “Ritratto” (1st version) in Milano and later he started to conduct also Henri Pousseur music . In 2004 he has conducted the first Australian performance of the “Concerto for 2 timpanists and orchestra” by Philip Glass in Sydney Opera House with the Sydney Symphony Orchestra.

In 2010 he has conducted in Rome the first Italian performance of “For you”, written by Michael Berkeley on a libretto written by Ian Mc Ewan and, more recently, other first world performances of operas such as “Viaggio Musicale all’Inferno” by Giancarlo Facchinetti (Brescia Teatro Grande 2018) and “Re di donne” by John Palmer (Spoleto Caio Melisso Teatro Sperimentale 2019).

He has founded the “Gruppo Nuova Consonanza di Milano” with whom he has conducted in the main Italian chamber music societies seasons. In 1995 he has been onef of the founders of the “dèdalo ensemble” , specialized in modern and contemporary music, where he still is Artistic Director and Music Director and with whom he has conducted in Europe and America an impressive number of first performances. Actually the 26th concert season of dèdalo ensemble is starting.

Since 2000 he is one of the organizer of the Composition Competition “…a Camillo Togni” where the jury has hosted famous names of conteporary music landscape.

Since 2018 he organizes as well the International Conducting Competition on modern and contemporary music “Città di Brescia-Giancarlo Facchinetti”.